Me and my avatar 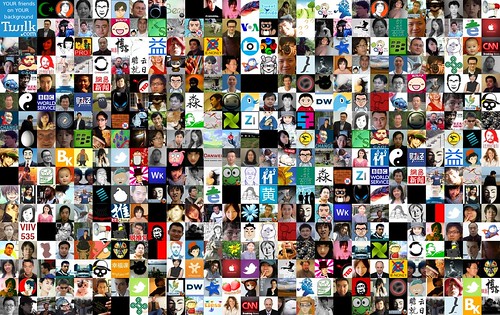 What sort of profile photo or avatar do you use on your social networks? Do you use the same one everywhere or do you use a variety, one for each network? Do you use a photo of yourself and is it passport style, in profile, only part of your head, upside down, from behind, in sunglasses, only your legs? Do you use an impersonal avatar in the form of a cartoon character, a symbol, a logo? Or do you simply use the anonymous default silhouette avatar that all networks offer? How do you react to different avatars in your networks? Do some seem more trustworthy than others? Do you tend to follow people with photo avatars or does it make no difference what avatar people use?

A recent post by David Hopkins, Does your avatar matter?, caught my attention. David is a rare exception to one of my own rules - I tend not to follow people without a photo of themselves. David has previously used a cartoon character as his trademark in social networks (especially Twitter) and in the blog post he explains how he has experimented with different types of avatar over the years. He now uses a photo instead of the cartoon but the transition took time, first by showing part of his face and then a blurred version and now a full-face view. Even if the cartoon avatar had become a sort of trade mark he realised that his students had a right to see him in person. First impressions are important and your choice of avatar says a lot about you; even a non-choice is a choice.

The post has not surprisingly sparked a good discussion. Many people see their avatar as a trade mark and a selection of their personality and are of course reluctant to change that strong image for a mere photo. Many people involved in political opposition and other sensitive issues have very good reasons for not revealing their true identity and for many it is indeed dangerous and foolhardy to do so. It is often important to draw a line between me as a person and my political/professional role. Many politicians who tweet or blog have one avatar for their official role and another for their personal networks. If your account is mostly used for professional purposes it can be confusing for your network if you intersperse that with highly personal information, party photos etc. Such accounts can also be manna for the tabloid press.

I have always used a photo of myself and update only occasionally. Changing too often can cause confusion. Especially in professional networks I think it's only right to show who I am. Otherwise it's like turning up to a meeting with a paper bag on my head. When I choose who to follow, the avatar does influence me. I'm least likely to follow people with default avatars and cartoon characters because I'm unsure of who they are and of their credibility. The crucial factor of course is their profile information and the value to me of what they offer. I always check profiles to see how they describe themselves and then check their latest messages to see that they are relevant for me. Those with a good reputation will be followed almost regardless of avatar but those of us who are less known need to win trust and anonymity is not the best way to achieve that.

But one thing is clear, your choice of avatar does matter.
Posted by Alastair Creelman at 10:49 AM 2 comments: