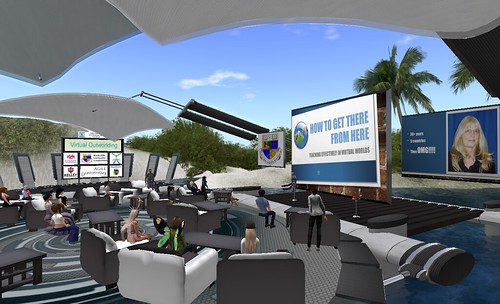 Most of us now spend a large part of our time engaged in video meetings with colleagues, students, family and friends and the web is overflowing with advice about how to make these meetings more effective, interactive and engaging. The weaknesses of online meetings have been exposed and discussed with privacy and security as major themes. Many people feel uncomfortable putting themselves on view to so many relative or complete strangers with the risk that someone finds it amusing to take screenshots that could be used later. In tools like Zoom, the meeting host has little or no control over how the participants view the session and there's a risk that some of them spend the meeting gazing at, say, a female student who they find attractive without her being able to stop such unwanted attention.

Some people decide therefore to keep their cameras switched off during online sessions. This may be to prevent unwanted attention or because they are ashamed of their chaotic home or because they don't feel confident or presentable enough to be visible in the meeting. This can be disconcerting for a teacher as in a recent Norwegian article (see Khrono - in Norwegian) where a university teacher wrote about the loneliness of teaching in Zoom to an invisible and generally silent group of students. They were willing to use the chat but did not want to be seen or heard.

At the same time, Facebook have been promoting a tool to help you create a relatively lifelike caricature avatar for your profile. This attracts many users who prefer not to use a real photo of themselves in social media and I wonder if it's time for the return of avatars in synchronous video meetings. About 12 years ago many of us were experimenting with meetings in the virtual world of Second Life. Back then it was still a bit unstable for those who lacked good graphics cards or bandwidth, but we were able to meet and discuss in interesting virtual environments (under the sea, in space, on a tropical island, you name it). It gave an added sense of place to the online meetings rather than the two-dimensional wall of talking heads we have in today's meetings. Second Life is still there and is used by all sorts of enthusiasts, including many educators, for roleplay, simulations and exhibitions. There are also numerous other virtual world tools offering customised environments for virtual exhibitions or conferences and the chance to wander around as an avatar, mingling and interacting with other visitors (see, for example, IMVU, Virtway)

Despite a barrage of hype, Second Life was probably ahead of its time back around 2008, but I always liked the spatial element. I still remember discussions sitting around a camp fire in a forest or listening to an evening outdoor piano concert in a small town by the sea with about 100 other avatars. According to one article a colleague of mine wrote back then, some students felt more comfortable communicating in the virtual world than in a regular video meeting because it was their avatar who was speaking. There are of course very good reasons for meetings where participants must show their faces, but I wonder if some discussions could benefit from a certain degree of anonymity.

Time for virtual worlds to make a comeback?

Posted by Alastair Creelman at 5:26 PM No comments:

The end of the classroom? - at least in corporate training

There is no shortage of speculation on how education will change after the present crisis is over. Will we invest heavily in improving online education and integrating digital tools and platforms into mainstream teaching? Or will we simply breathe a sigh of relief and revert to business as usual? Or, most likely somewhere in between. However, an article in Forbes, Corporate Education Will Never Return To The Classroom, claims that, in the corporate sector at least, a major change has already happened and that is the death of classroom teaching.

I worked for about 15 years in corporate training and the courses I taught were between one and three days and held at training centres och hotels around the country. They had specific objectives and were rather heavy on content. It was an expensive business transporting people from all over the region to a central location with hotel accommodation, time off work and expenses to consider. My courses would have easily fitted an online format but in those days the internet was young and training centres were fully booked. We did try to save money by making me the most mobile element of the courses, visiting most cities in the country regularly so that local people would not have far to travel. But it was still an expensive business.


The expense and time of bringing together groups of employees for in-person training is exorbitant in comparison to high-quality online versions. Air travel, hotels, windowless conference rooms and convention centers, the risk liability of group training events and, frankly, the poor quality and unmeasurable outcomes of in-person corporate training have always been complaints. These complaints are greatly amplified now in comparison to the online alternative.

The online alternative, if well designed and flexible, is clearly the way forward in the corporate sector but does this translate to universities and colleges? The article is fairly confident that even here there will be a demand for greater flexibility and much more online opportunities


The vast majority of traditional age students (and their teachers and parents) still greatly desire returning to the classroom and campus. But the education consumer is also quickly splintering into many new archetypes. And those will include traditional age students who will gladly shift to fully online and hybrid degrees in exchange for lower price points, faster completion and the ability to work while doing so. Students will simply have more options to choose from and decisions to make regarding their preferences for in-person vs. online. In the corporate world, though, the decision has already been made.

Online education will certainly be taken much more seriously by universities in the future and there will be a greater flexibility in terms of access, pace of study and blend of online and campus study. However, there is still a need to offer the coherence of a three or four year full-time degree that cannot be replaced by stacking many short online courses according to the student's preferences. The full campus experience involves so much more than the sum of the different courses, it involves networking, being part of a learning community and a social context. Higher education needs to diversify but the campus core is still unlikely to be threatened.

Posted by Alastair Creelman at 8:38 PM No comments:

Towards a different model for internationalisation

In the wake of the current crisis, internationalisation in higher education would seem to have ground to a halt. With international travel virtually impossible and unlikely to recover any time soon, the numbers of students studying abroad or applying for exchange programmes look likely to evaporate, at least for the coming year. This in turn puts enormous financial pressure on institutions who are heavily dependent on fees from incoming international students. International student and staff exchange programmes like the European Erasmus+ will also be on hold as long as borders are closed and international flights are cancelled. At the same time, the present global crisis shows clearly that global problems require global solutions making it all the more important that all students get experience in international collaboration. If physical mobility is going to be increasingly limited, particularly due to its environmental impact, we need to rethink our approach to internationalisation with virtual exchange as the norm rather than the exception. Of course it's not the same as travelling and meeting people face-to-face but it's a much more inclusive practice and can be implemented across the board.

An article in University World News, Is the pandemic a watershed for internationalisation? takes a critical look at traditional practices and looks forward to a new and more inclusive approach to internationalisation. Physical mobility has always been an exclusive activity.

Clearly, international travel is elitist: it is only a possibility for a minority of students and in terms of outbound students from the Global North, these are often white, female and economically advantaged. ... In short, while mobility has enormous potential as a transformative educational experience, it is an exclusive activity and its impact on individuals is variable.

Traditional mobility will not disappear in the future but it will simply not be viable in the long term.  The last two months have shown us that most educational activities can be carried out digitally, in many cases as well or even better than in a physical space. More people will question the necessity of a physical meeting if the same can be achieved digitally. International conferences and projects can become truly global if they are online and potentially opening up to all those who could never afford to attend the physical equivalent. Digital collaboration with partner institutions is already increasing and will surely increase sharply after the crisis is over. The term global learning is presented as one way forward, meaning that the curriculum is global by default..


The term global learning, as defined by the American Association of Colleges and Universities, for example, provides universities with a way of conceptualising and developing a curriculum that engages all students in “the critical analysis of and an engagement with complex, interdependent global systems and legacies … and their implications for people’s lives and the earth’s sustainability”.

Another aspect of the new internationalisation is widening engagement with the local community where in many countries there is a diverse and multi-cultural society, something the article describes as a pedagogy of encounter.


A pedagogy of encounter is a powerful concept because it does not rely on mobility. There are many opportunities to engage students in intercultural and global learning in class, on campus and in local communities. Thanks to large-scale global migration in recent decades, as well as the widening participation agenda, in many countries ‘local’ students are more diverse than they have ever been.

A globalised curriculum is certainly possible and there is technology to enable it. The big question is whether we have the will and the vision to move in this direction. I suspect after the current crisis there will be a massive demand for a return to business as usual. Physical mobility programmes are familiar territory, easily measured and very visible. A globalised curriculum involves developing a new mindset among teachers, students and management, is much more complex to implement and is harder to quantify and showcase. I love the vision, let's see if we can learn all this.
Posted by Alastair Creelman at 5:11 PM 1 comment: