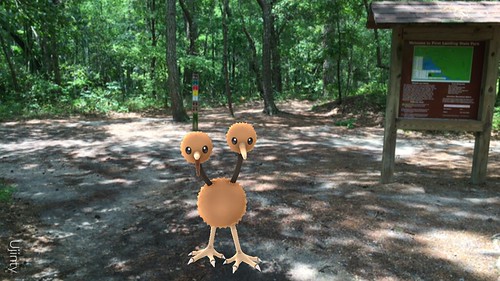 "FL-Trail Center" (CC BY 2.0) by vastateparksstaff

It's maybe a sign of the times that in a summer of conflict, terrorist attacks and political turmoil, millions of people are running around searching for virtual cartoon characters. I admit I find it hard to relate to Pokemon Go, just as the first wave of Pokemon in the mid-nineties escaped me, but one positive result of the trend is that it will be much easier to talk about augmented reality from now on. AR is already being used in education, simulation, tourism and gaming but Pokemon will push it into the mainstream and I expect to see a boom in the field in the coming year.

However maybe we can see Pokemon Go as more than just a fun game but a useful metaphor for the times we live in. We no longer see the world as it is (maybe we never did) but our view of reality is augmented or filtered through different lenses; media channels, politicians, populists, advertising etc. Every day we are met by competing and often wildly differing narratives where demons, trolls, half-truths and fantasy appear before us. It's all too easy to mix reality with these superimposed virtual figures. We need to raise our awareness that the information we get is augmented by the channel that conveys it. Educators need to focus more than ever on source criticism and the ability to assess the credibility of information. Indeed in my view this is the most important skill in all levels of education today. We need to be able to distinguish between the real world and the Pokemon figures that appear to inhabit it.
Posted by Alastair Creelman at 5:37 PM 2 comments:

There is no shortage of trend reports and guides on the future of online learning but sadly too few institutions who are using them as a base for their strategic planning. The challenges ahead for higher education are complex and require new approaches and innovative solutions in a sector that is so deeply rooted in tradition and history. This tradition coupled with the high level of respect and credibility that university qualifications still command makes it all too easy to think that a business-as-usual strategy is the safest course to plot.

The Canadian educational technology support organisation Contact North published earlier this year an excellent trend overview entitled The future of online learning. This describes the increased complexity of today's educational landscape with new actors, models and credentials jostling for attention and challenging the traditional setup. At the same time universities are under increasing financial and regulatory pressure to be more efficient, result-oriented and accountable with a wider than ever range of students with high expectations in terms of personalisation, flexibility and work relevance. The report examines what this means for higher education institutions and notes that a new ecosystem is developing to cater for a much more diversified and demanding target group. The gold standard of the university degree will be challenged and augmented by new types of credentials including micro-credentials like badges. Short and flexible programmes with strong links to workplace experience will allow many to combine work and study without the need to spend several years on campus. This will demand new methods for assessment, recognition of prior learning and the development of new forms of quality assurance. This doesn't mean that the traditional university model is going to be overthrown but it does mean that there will be more alternative paths to learning.

An example of how to use these trends and feed them into a university's strategic development is seen in the results of the FUTURA (Future of University Teaching: Update and a Roadmap for Advancement) project. This describes the process of applying trends in online learning to teaching practice and university strategy at Universitat Oberta de Catalunya (UOC); read more in an article from the UOC's eLearn Center, IDEAS: a new framework for next generation pedagogy.

The IDEAS model (explained in the image on the right) provides a sound basis for re-examining pedagogical development at any university and reinforces most of the conclusions of Contact North's analysis. Everything described here is already taking place but mostly in a fragmented way through projects or innovative faculty with few institutions developing a comprehensive strategy. I suspect that the prime movers are distance education universities since their focus is online but campus universities ignore this at their peril.

These alternative paths are already attracting an increasing number of school leavers who are becoming less likely to head straight to university campus. A new article in eCampus News, Could these 3 burgeoning nontraditional pathways be a boon for traditional institutions? describes how many American students are trying one or a combination of the following before considering campus:
“College costs keep growing and student debt is over one trillion dollars,” explained Richard Wang, CEO at Coding Dojo in a statement. “These alternative education options can help keep student debt under control, while providing individuals with real-world experience and skills employers are looking for in job candidates.”

Trends are becoming reality though not always in a revolutionary and disruptive way. New opportunities and pathways emerge often largely unnoticed until they reach a level that cannot be ignored. I have previously likened these changes to a glacier; the landscape is being radically changed but the changes and the pace of change are not always evident to those who are standing on the glacier itself. Only when the glacier melts will we see the full extent of the change. Those institutions who realise they are on a glacier and start changing now will be able to meet the challenges ahead. The most dangerous option is business as usual, thinking that the ground under our feet is solid.
Posted by Alastair Creelman at 9:23 AM 2 comments: