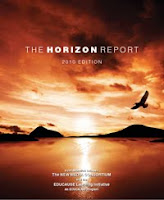 The publication of the annual Horizon Report has become one of the highlights of the edtech year. Which technologies will be in the spotlight this time? What challenges does higher education face? This year NMC actually released a sneek preview version of the report in December to set the discussion in motion. Now the full version has hit the streets and this will no doubt be one of many reviews and summaries that appear in the coming weeks.

The format of the report is as ever: six technologies are nominated that will have a major impact on higher education in the short, medium and long term. However I find the most interesting parts of the report are the pages where they list the challenges facing universities today. In the face of the social web revolution of today the very role of universities is being questioned:

"Institutions must consider the unique value that each adds to a world in which information is everywhere. In such a world, sensemaking and the ability to assess the credibility of information are paramount. Mentoring and preparing students for the world in which they will live, the central role of the university when it achieved its modern form in the 14th century, is again at the forefront. Universities have always been seen as the gold standard for educational credentialing, but emerging certification programs from other sources are eroding the value of that mission daily."

Ubiquitous learning has become a reality with students able to access information anywhere, any time and in many ways. Informal learning and alternative education paths are challenging traditional forms. According to Horizon the critical challenges today are:
I'd like to add another major challenge and that is the growing digital divide in higher education; those who understand the social web and are trying new models and methods and those who still work with the tools of the last century. When Horizon talks of technologies becoming mainstream they are talking about the edtech front runners. I suspect the majority of institutions today are still grappling with establishing LMS, using one way web sites and use mostly e-mail for communication. How do we win over the edtech sceptics?

It's no great surprise that mobile computing and open content are the two technologies that occupy this year's category Time to adoption: one year or less. The advent of the iPhone and Android have brought mobile computing to everyone's attention even if there are still concerns with security, privacy and classroom implementation. They symbolise the concept of ubiquitous education and are becoming the devices of choice for many students. The challenge is for universities to harness this potential and find ways of integrating this technology into courses. The report, as ever, provides plenty of inspiring examples of universities using these technologies.

Open content is another disruptive technology that threatens many traditional activities like academic textbook publishing but which is judged to have sufficient momentum to have a significant impact this coming year. Having so much open content available increases demands on digital literacy and so-called 21st century skills:

"Open content shifts the learning equation in a number of interesting ways; the most important is that its use promotes a set of skills that are critical in maintaining currency in any discipline — the ability to find, evaluate, and put new information to use."

On the 2-3 year horizon the report nominates e-books and augmented reality. E-books are of course already evident but as more versatile, attractive and reasonably priced devices appear they will become mainstream enabling students to store all course literature onto one device and forcing radical changes in the publishing business as well as libraries. The report gives links to universities that are already using e-books and e-journals and have encouraged the uptake of e-book readers amongst students.

Augmented reality is being driven by the mobile computing boom with apps available already in both the iPhone and Android. Pointing the camera at an object, building or person will activate icons on the screen that can be touched for information. Google's SkyMap allows the user to see AR information on stars and constellations by pointing mobile device at them. There are also apps (see video TAT augmented ID) that will show you information about people, such as which social networks they belong to. There is massive potential in this technology but already the personal integrity warning lamps are flashing.

On the far horizon are gesture based computing and visual data analysis both of which are already evident but which will take a few years to become everyday technologies. Gesture based computing is already available in gaming with Nintendo Wii and the new challenger Xbox Natal but will no doubt become the natural way for us to interact with devices.

"The kinesthetic nature of gesture-based computing will very likely lead to new kinds of teaching or training simulations that look, feel, and operate almost exactly like their real-world counterparts."

Visual data analysis deals with presenting complex data in advanced graphical representations and manipulated in real time. At present this is restricted to fields like physics, chemistry and advanced mathematics since it requires enormous amounts of processing power.
Posted by Alastair Creelman at 9:32 PM