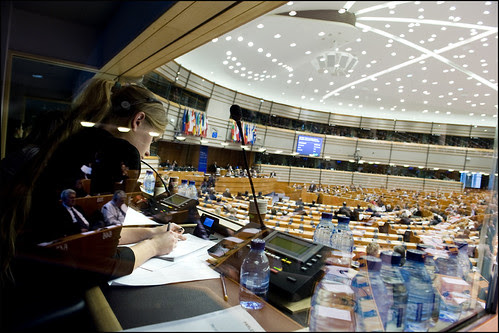 We native speakers of English have a tremendous advantage. We are able to use our native language and can make a good impression at conferences with relative ease. Everyone else however has to present their complex ideas using a language that is sometimes their third or fourth language. I have heard many faltering presentations at academic conferences by non-native English speakers where the speaker has not been able to do him-/herself justice because of language difficulties. I often wonder how good they could be if only they could speak freely and whether it would be a good idea for some conferences to arrange for interpreters so that at least 2-3 official conference languages could be used. Interpreters may well be an expensive option but they would give more participants a voice.

In the spring I attended a conference in Spain where 4 languages were used: Spanish, English, French and Italian. Interpreters sat in booths and did a magnificent job translating everything in all combinations of languages. We had panel discussions where every member used the language that they felt most comfortable with and everyone simply plugged in a headset when the language changed. The result was that many people who would have been silent in an English-only conference were able to speak on an equal footing to the English speakers.

I also notice a tendency of native English speakers (maybe even me!) not to make any allowance for the fact that the audience is mostly non-native speakers by speaking at full speed and using idiomatic English. We need to be more aware of what it's like to listen to a foreign language all day long and be expected to contribute to complicated discussions on themes that you understand but cannot formulate well enough in that language. The native English speakers are generally very vocal at conferences but how do we give a voice to those who may well speak several languages fluently but non of them is English? It's convenient to assume that all academics can speak English but it acts as a strong filter, empowering many but disempowering many more.
Posted by Alastair Creelman at 9:52 PM