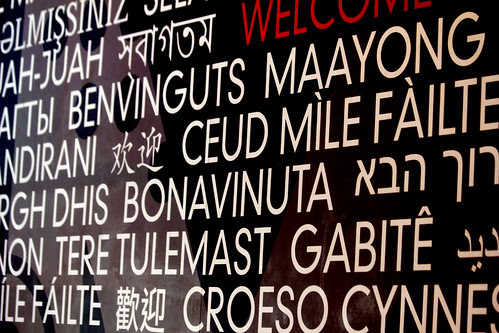 The spread of English as the language of the world has certainly been accelerated thanks to digital media and it could be argued that this threatens to wipe out many smaller languages, some teetering on the brink of extinction. András Kornai describes this danger in an article, Digital Language Death, showing how many languages have a very low digital presence. Even if enthusiasts have accomplished much to create for example a Wikipedia presence for many smaller languages  Kornai argues that this will not be enough to create a community strong enough to help push the language truly into the digital space:

Of the approximately 7,000 languages spoken today, some 2,500 are generally considered endangered. Here we argue that this consensus figure vastly underestimates the danger of digital language death, in that less than 5% of all languages can still ascend to the digital realm. We present evidence of a massive die-off caused by the digital divide.”

At the same time technology could also empower many of these threatened languages and cultures that have been marginalised in the past. Could the development of open educational resources (OER) be a key to empowerment for smaller languages? This was the theme of a workshop, International workshop on policy for OER and less used languages, run by ICDE (International Council for Open and Distance Education) along with two projects I'm associated with, NordicOER and LangOER. This gathered an impressive cast of OER experts, stakeholders and policy makers to discuss how the development of quality OER and open educational practices can strengthen the position of such languages. For a full programme of the speakers and further details, have a look at the ICDE article on the workshop.

UNESCO is one of the main driving forces behind the global uptake of OER, emphasizing the right for free and open access to knowledge to all people in all languages. Their representative in this workshop, Abel Caine, gave several examples of recent initiatives, especially the 2012 UNESCO OER Paris declaration calling on all member governments to make all educational materials produced with public funds freely available to all. This has resulted in many national and regional initiatives such as Indonesia (national OER policy) and West Africa. See more in the UNESCO OER Programme.

The development of OER as well as open courses (not necessarily MOOCs) has opened new opportunities to offer extremely narrow courses in places where they would previously never have existed. An open online course in, say, Welsh for beginners can attract students from all over the world, something that no traditional university course could ever do. I once read about a guy in the midwest of the USA who wanted to play the Scottish bagpipes. The chance of a local college running that sort of course was less than zero but on the net it was no problem and soon he was getting tuition via Skype from a teacher in Scotland. Many languages have rallied round the creation of their own Wikipedia and involved a large section of the community to develop the entries. There are countless sunshine stories like this showing how local languages and culture can become glocal. Alan Tait talked of OER as the long tail of education whereby resources of extremely limited interest can still be always available in a similar way to the global scale and reach of Amazon can store book titles that no single bookstore could afford to keep on the shelves.

Some takeaways from the workshop:


But can open education contribute to strengthening smaller languages and cultures? Despite the overwhelming advance of English I believe there are opportunities for less used languages (however you define that vague concept) to gain much more legitimacy and impact than was possible before. It requires concerted effort but this can become a community building process galvinising all generations to contribute to preserving and developing the language and culture. Simply translating existing English resources is not enough, new resources that are relevant to the community must be developed and this is a creative rather than simply a reproductive process. Successful models from the English-speaking world can be adapted to local requirements. Teachers and students can collaborate to produce open textbooks and other educational resources that few if any traditional publishers would see as commercially viable. Open courses can be offered to a worldwide audience including speakers who have long since emigrated from their homeland. Smaller languages can help each other by sharing development costs, collaborating in cross-cultural projects to develop multilingual solutions and suchlike.

ICDE will soon publish the full results of the workshop and the LangOER project will be investigating the area of language and OER in more detail in the next three years. Stay tuned.

Have a look at my colleague, Tore Hoel's blog post on the topic:
Adopting OER for less used languages: We need hard talk on tools and infrastructure!

Posted by Alastair Creelman at 7:33 PM