How many devices do you need in a classroom? 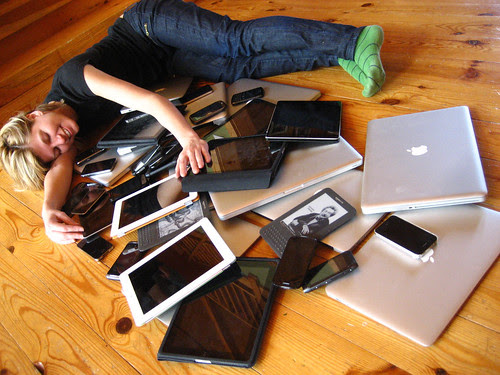 How many devices do you need in a classroom? I imagine the standard answer would be one device per student since so many schools and colleges in the world have invested in one laptop/device per student schemes. However there is a problem with this approach as Edna Sackson describes through personal experience in a post entitled Too many iPads .... She had a special guest in her classroom, none other than the father of the school in the cloud concept Sugata Mitra. He gave the class a task which involved them finding out as much as they can about a concept without any teacher guidance, using tablets, mobiles or laptops to search the net for relevant information. Because they all had their own devices the task resulted in silence as each pupil started searching on their own.

Interestingly, the children initially stay in their own seats and investigate on their individual devices. No-one has told them not to move or converse. In fact Sugata spent some time before the question chatting with them about how often and why they move seats.

After some prompting they did start discussing and solving the problem together but the lesson here was that collaborative work can sometimes be inhibited in a one-to-one classroom. Indeed one of the key principles of Sugata Mitra's work is having around four pupils sharing one device since that forces them to discuss. This is good news for cash-strapped schools who wonder how to afford a one-to-one investment but when all pupils have their own devices and some have several devices, how can we encourage them to look up from their screens and discuss with each other? It depends on the task but I think it's perfectly feasible to agree in advance that for this particular exercise there will only be one device active in each group and let them see it as a challenge to complete the task this way. The key is learning to adapt technology use to suit the situation. Sometimes the focus is on discussion and collaboration and therefore devices can be shared and at other times the focus may be on gathering information and analysis of sources and then everyone will need their own devices.

Posted by Alastair Creelman at 8:01 PM