How can open educational practices empower less used and minority languages? This was the question behind a webinar I had the pleasure of moderating a couple of days ago - watch the webinar recording. The webinar was part of the European project LangOER that aims at enhancing the teaching and learning of less used languages through open educational resources and practices. About 70 participants (193 registered) took part in the live event which featured presentations from Sylvi Vigmo (University of Gothenburg, Sweden), Kate Borthwick (University of Southampton, UK) and Anna-Comas Quinn (Open University, UK).

I was particularly interested in the ideas of how openness can empower smaller languages and that we need to think more carefully about reuse and adaptation when we create new resources. Anna described the growth in open translation communities, often centered around educational content providers like TED (Open translation project), Khan Academy and Coursera (Global translator community). Course material, mostly lectures, are translated into hundreds of languages by networks of enthusiasts making the material accessible to local communities who would otherwise never benefit from such services. Translation of Wikipedia material into hundreds of languages has been going on for several years and the existence of an online encyclopedia in a less used language can become a source of pride for the community and a catalyst for further activities to strengthen the language and culture. School classes, student groups, academics and other experts can all help to create educational resources in smaller languages that would never be viable projects for commercial publishers. 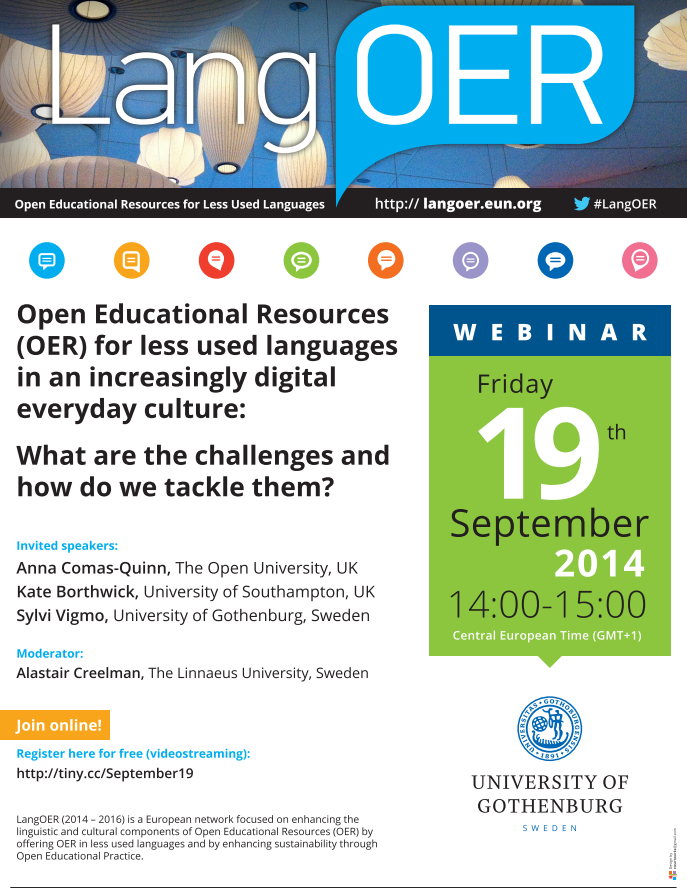 But simply translating English language resources is only the tip of an iceberg of opportunities for smaller languages and cultures. Open education gets really relevant when resources are designed with reuse and adaption in mind, allowing other users to modify the material to be more relevant to local culture and practice. The majority of open resources today are not easily adapted and were developed for one particular context without considering who else might use it in the future. I would like to see a set of simple guidelines for OER sustainability that all educators could easily check when creating new resources. How to ensure that your material can easily be translated, edited, supplemented to fit other contexts. Maybe such a checklist already exists but it needs to be more widely distributed and used.

I look forward to following this discussion in the future.

Have a listen to this short interview I made with the project leader of LangOER, Katerina Zourou, for a general background to the project.

listen to ‘EIF/LINQ 2014 Katerina Zourou’ on Audioboo
Posted by Alastair Creelman at 3:11 PM