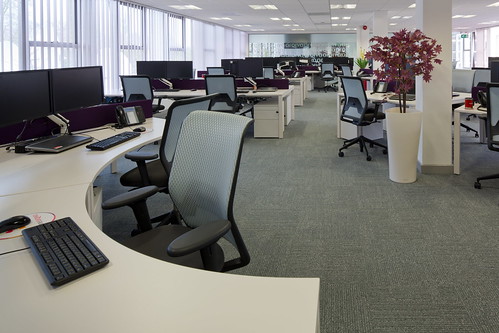 For some reason we keep building open-plan offices despite frequent studies that show them to be counter productive. I seldom meet people who actually enjoy working in this type of environment though many put a brave face on it and echo the organisation's belief that it promotes openness and synergy. The latest evidence against open office spaces comes in new research from Harvard University summarised in the British Psychological Society's Research Digest, Open-plan offices drive down face-to-face interactions and increase use of email.

The study monitored the behaviour of employees who had recently moved to an open-plan office and shows that they became significantly less collaborative than they had been before the move. Instead of engaging in all the spontaneous lively discussions and collaboration envisaged in the popular mythology they became silent, preferring to discuss with each other by e-mail or chats. The most striking result of the research is the magnitude of the reduction in face-to-face interaction in the open-plan office.

A common complaint about the open-plan office is the lack of privacy and the difficulty of speaking to a colleague without everyone else overhearing you. The constant movement of people in and out of the room also disturbs thought processes and keep you wondering where a colleague is going now or where they have been. Transparency becomes a distraction rather than a stimulus to increased activity. The BPS article states:

If you’ve ever sought refuge from the gold-fish bowl of an open-plan office environment by cocooning yourself with headphones, or if you’ve decided you’d rather not have that challenging conversation with a colleague in front of a large group of your peers, and opted to email them instead, then these findings will come as little surprise.

Many such offices fall silent since every conversation risks disturbing someone and as a result many people wear headphones all day and communicate by text. The next question then is why bother to travel so far to the office to sit all day doing work that could be done just as well from home? The incentive to come to work is even lower when you have no assigned space and have to take whatever desk is free when you arrive. This lack of personal space where you have your family photos, mascots, a plant or other comforts reinforces a feeling of anonymity and the feeling that if you left no-one would notice. Of course there are exceptions where an open-plan environment really works but the evidence against the concept is stacking up and I wonder how much longer it will continue to be ignored. As one article points out  (Inc. It's Official: Open-Plan Offices Are Now the Dumbest Management Fad of All Time) even if the real reason for open-plan is simply to save money on office space the amount of money lost to the resulting inefficiency should make organisations think again.

Conclusions? We need a variety of spaces, both physical and digital, for different types of work. People need private space to feel secure and work well but they also need spaces for discussions, meetings and interaction. Working from home offers greater flexibility but to make it work well we also need digital meeting spaces for spontaneous discussions and collaboration. We can move between these spaces during our daily work but a fundamental requirement would seem to be a quiet space to call your own.

ReferenceEthan S. Bernstein, Stephen Turban. The impact of the ‘open’ workspace on human collaboration. Philosophical Transactions of the Royal Society B, Biological Sciences. 2018. http://doi.org/10.1098/rstb.2017.0239
Posted by Alastair Creelman at 4:24 PM