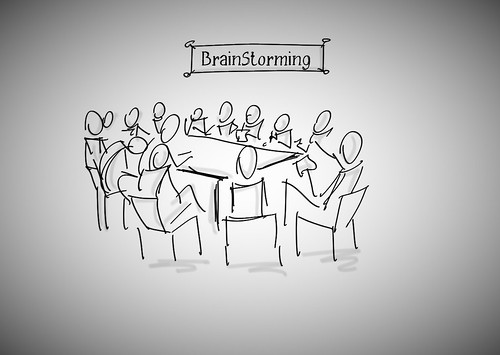 "brainstorming" (CC BY 2.0) by Luigi Mengato

A recurring theme on this blog is a plea for more silence in a world drowning in noise. An interesting article in the Harvard Business Review, The case for more silence in meetings, reinforces this when it comes to effective meetings. The main idea is that effective brainstorming and creative thinking that involves all participants is a largely silent activity. This goes against the popular image of creative teams in spontaneous, lively and very vocal discussions in open office environments. The article describes how noisy meetings are influenced by flock behaviour where the opinions of the most vocal members are valued and those of less influential members are either dismissed or are never even voiced due to fear of rejection.

Attendees often hold back in meetings, waiting to hear what others say and what their boss might say out of fear of being perceived as difficult, out of touch, or off the mark. Silence can be a solution to this problem, allowing space for unique knowledge and novel ideas to emerge.

A more effective alternative is to brainstorm in silence and in writing allowing everyone to have their say and ideas are anonymous. It's the same in the classroom where genuinely creative ideas often drown in the noise and groupthink dominates. Really creative thought often happens when we're alone and can concentrate; just think of the good ideas you often come up with at night or on a long journey. The article describes a number of strategies for more creative meetings where the participants don't even need to be in the same space to contribute effectively. In addition the use of asynchronous collaboration spaces allow us to harvest ideas from colleagues at other locations. We simply need to get away from a lot of stereotypes about effective meetings. Maybe we also need to design more office spaces that can offer silence.

While we typically default to traditional approaches to meetings, silence-based approaches present additional options that research shows can yield better results. Leveraging independent brainstorming, the cluster technique, anonymous voting, and written communication will expand leaders’ toolboxes — ultimately making them more effective. While silence certainly shouldn’t replace talk entirely, there are times it may be useful. Silence can even be golden when it comes to promoting meeting success.

Posted by Alastair Creelman at 9:00 AM