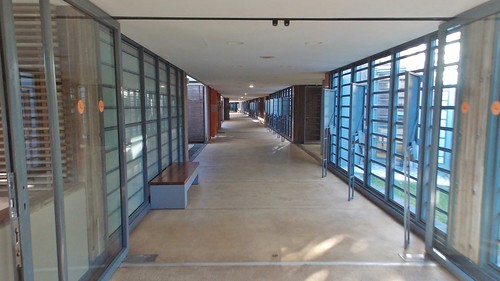 Most learning takes place outside the classroom. Of course, the opportunity to meet, discuss and practice in a structured setting is extremely important but the real battle to understand and implement new knowledge takes place in informal settings: at home, in the library, discussing in a cafe or during a long walk or run in the park. But a relatively unexploited learning space is the area outside the classroom and the corridors linking the formal learning spaces.

These spaces in between are discussed in an article by Luke McCrone in Wonkhe, Learning in the spaces in between. Valuable interaction often takes places before and after a class between students and between students and teachers, but only if the space provides a comfortable environment for this. The furnishings can invite groups to sit and discuss, use their digital devices or even discuss with an absent colleague by video. Previously dead areas such as corridors can become collaborative spaces if there are comfortable seats, power sockets, tables etc.

Frankly, the availability of this sort of transitional space should be prioritised. It is a relatively low-cost intervention that could be the difference between student interaction and disconnectedness. Kitted out with comfortable furniture and other amenities at the fringe of a lecture theatre, it has proven transformational. A student clarifying misunderstandings with the lecturer, or a chance encounter between two friends reflecting on an exam are examples of some of the active learning behaviours I have observed.

There is no doubt great potential here but no mention is made in the article about digital spaces. In most universities the digital campus is the learning management system, divided into class or course silos, offering very little interaction between students from different courses to meet and discuss. The discussion forums are seldom attractive spaces for more informal discussions since students often feel that anything written there is likely to be observed and assessed. Where are the digital spaces in between? How can we create them? Can we set up bookable digital group rooms so that students can meet with full video, audio, chat and screen-sharing functionality. How about social spaces that can lead to meetings with students from other disciplines but without the risk of meeting spammers and trolls?

Way back in the heyday of Second Life there were universities experimenting with virtual campuses where such chance meetings and group work were possible. Those spaces were generally restricted with only password access. The technology wasn't quite mature enough then, nor were most users, but the next generation of virtual worlds and virtual meeting spaces could lead to a much more interactive and social virtual campus. McCrone's research will be interesting to follow, but we mustn't forget the digital spaces. The campus spaces are used by many students but the digital space is the only one that unites the whole university. We need to build it for the future.
Posted by Alastair Creelman at 9:46 AM