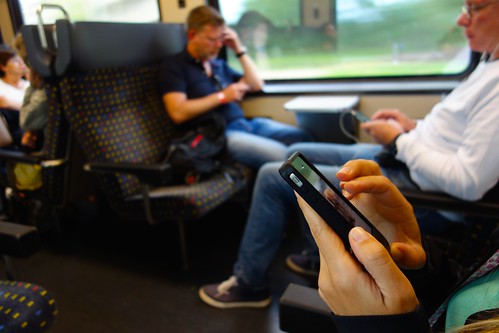 There's a shoe repair shop in town that I visit now and again that is making a brave last stand against the compulsory digitalisation of our lives. Not only is the concept of repairing anything unthinkable for most people today, but the owner only accepts cash - no cards, no mobile payment apps. I wished him the best of luck but in the end the digital juggernaut will run him over. I still carry cash as a futile personal protest against everything I do being tracked and stored by corporations I have no control over. It's nice to be able to do something that is off the record. Digital products and services have totally changed our society and of course I benefit from them in so many ways but I'm increasingly uncomfortable about the abolition of privacy that we are happily consenting to as we accept terms and conditions that we never even read let alone understand.

Compulsory digitalisation is marginalising society's most vulnerable making even simple tasks almost impossible without a smartphone or laptop. It is becoming increasingly difficult to survive without at least a smartphone, devices that are not exactly free of charge. Many smaller shops and cafes here don't accept cash anymore. We are so dependent on our mobiles that we seldom dare to actually turn them off anymore. If the net went down for more than a few hours society would grind to a halt. I realise this sounds like typical grumpy old man behaviour, but this week I found solace in a couple of articles in the Guardian.

Firstly Jen Wasserstein writes about life without a smartphone, My life without a smartphone is getting harder and harder. She's a professional with a very digital working life but has decided to stick with an old-school mobile that only does phone calls and texts. She feels the world slowly shutting her out as even restaurant menus are now hidden behind QR-codes. Indeed parking a car, buying a bus ticket or even getting into unstaffed self-service mini-stores require apps. I admire her tenacity but I suspect that she too will soon concede defeat and join the digital captives.

At a recent dinner with friends, after some initial chatting, everyone stared at menus on their phones. I sat there for a minute looking around the table and then whispered to my neighbor, discreetly asking to look on. When I eat out alone, I show my flip-phone to the waiter and ask for a proper menu. After an eye-roll, they’ll either bring out a paper menu from some vault in the back or hand me their own phone to use.

We have become so dependent that we have forgotten how to do things without our digital devices. We often discuss all the new "21st century" skills we have acquired but we have probably lost just as many. This is the topic of a new book by Pamela Paul, 100 Things We’ve Lost to the Internet (Random House USA), What does tech take from us? Meet the writer who has counted 100 big losses. Some of the lost skills are now irrelevant anyway - finding people in gigantic phone directories or writing cheques for example - but Paul's book reminds us of many other skills and experiences we have lost in the digital takeover. She's not an off-grid type but simply wonders about the everyday experiences that fallen by the wayside in our hyper-connected lives, such as being bored, getting undivided attention from parents/children, finding your own way, writing letters etc. I particularly like this comment:

In general, when I hear the phrase ‘There’s an app for that’, my first question is: ‘Does there need to be?’

We should have a choice but we're choosing to not to. It's a combination of commercial and group pressure as well as a rather naive view of the benefits of technology. People are vaguely aware of the dangers of mass surveillance but seem to think that those are only issues in authoritarian countries - it can't happen here.

Here, perhaps, is a modern paradox. We embrace the internet because it seems to hugely increase our autonomy, but the online world soon gives us the sense that, when it comes to what it offers us, we have no meaningful choices at all. The only thing to do is to drop the old, embrace the new and live with the consequences.

Posted by Alastair Creelman at 9:43 AM