Bon appetit on the net 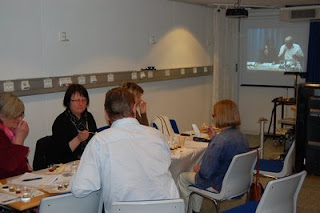 Way back in the fifties they tried to add smell to feature films (smell-o-vision) by scraping a card at a given moment and thereby being able to capture, for example, the doft of spring flowers or newly-cut grass. The technique was a flop of course and despite today's advances in HDTV we still can't smell or taste anything we see on screen. Imagine how popular all those cookery shows would be if we could smell and taste what they make!

However you can still use the net to taste and smell food. At work today we have been hosts for a fascinating initiative where juries around Sweden have been tasting and judging locally produced food products by video conference. Under the guidance of French gourmet Paul Le Mans, groups sat in 8 video conference studios around Sweden and tasted different types of bread, meat products and cheese. The aim was to develop the vocabulary of describing taste, smell and touch. All participating groups had the same selections of produce and tasted one after the other and agreed on common descriptive terms.

This event was part of a project called Eldrimner (main site, in Swedish), a national resource centre for artisan food, which focuses on promoting local food produce around Sweden.
Posted by Alastair Creelman at 4:01 PM