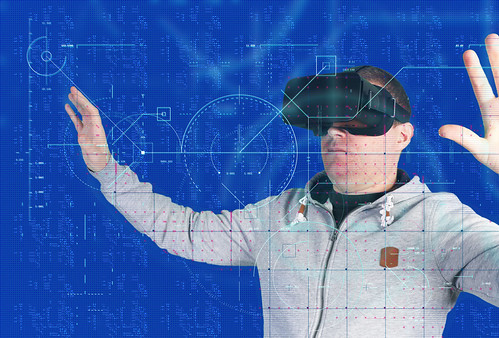 "Abstract image of virtual reality experi" (CC BY 2.0) by focusonmore.com

The battle for the metaverse is on with most of the media buzz focused on Meta (a k a Facebook) and their plans to engage us all in their virtual market and meeting place. Already there are companies setting up virtual hubs and universities are also creating their virtual reality campuses which they hope will soon be full of student avatars. Reading about this in an article in Campus Technology, 10 Institutions Opening 'Metaversity' Campuses, took me back about 14 years to the heady days of Second Life and I wonder what we have learnt since then. These virtual campuses are built using EngageVR where you can design your own spaces and make them more or less accessible to visitors and residents. The best way to interact in the metaverse is through VR visors but you can also interact using your computer, though not so immersively. Students and teachers can then meet as avatars in the virtual campus and interact with objects, graphics, diagrams etc with voice communication and the ability to explore different environments together.

The new metaversity at Stanford is described like this:

The metaversity courses will be synchronous, and students can attend whether they are learning on campus or remotely. Each student will receive a Meta Quest 2 virtual reality headset for use during their course (courses can also be accessed via PC). Within the virtual learning environment, they will be able to engage with other students and their instructor in VR experiences such as delving into human anatomy, taking a time machine through history or studying astronomy on a spaceship.

The screenshots on Engage's site seem almost indistinguishable from the views of business centres and campuses on Second Life all those years ago. Apart from the VR headsets and better graphics I wonder what's new. Most academic experiments in Second Life simply recreated virtual versions of reality with copies of their campus environment complete with lecture halls where avatars could show PowerPoint slides to an audience of student avatars seated in rows. The new VR spaces seem to be doing the same thing. In a virtual world where the laws of physics don't apply and you are free to create any space you can imagine, why do we keep building classrooms and auditoriums? Why is it so difficult to escape the stereotypes?
I really enjoyed exploring Second Life back then in the tech-optimist days of 2007. It was probably ahead of its time but it demanded high-end graphics for a smooth experience, so many users gave up when they realised that their devices simply couldn't cope. Second Life is still going and has a devoted band of users who have obviously enjoyed the experience. What was really interesting about it was you could develop your own fantastic spaces and choose whether they were open to all or restricted access. You could build realistic copies of well-known places or complete fantasy worlds. You could choose alternative identities and take part in very convincing simulations that would not be possible anywhere else. A whole virtual economy was developed with people willing to pay real money for virtual real estate. There was a vibrant cultural life with concerts, art exhibitions, sculptures and fashion shows. I enjoyed exploring new areas of the vast virtual world that was built up and did actually have useful encounters with people I would never have met otherwise. The openness gave enormous opportunities but sadly also threats as the trolls and spammers found their way into the new world. The new VR spaces are much more restricted and controlled but maybe the freedom and creativity of Second Life was its greatest attraction.
If VR is going to be relevant to education it has to contribute something new and offer possibilities that are hard to offer in any other environment. That means more than just looking at 3D models of cars or DNA strings that the publicity films tend to show. There are great examples of simulation applications in areas such as medicine and the opportunity to offer realistic roleplay situations for professional development. However, the need for visors and expensive software means it will probably be accessible only for wealthy institutions and for specific niches where VR can really prove its value. Focus on the really innovative and pedagogically valid uses of VR and skip the reproductions of campus buildings and auditoriums.
Posted by Alastair Creelman at 11:31 AM